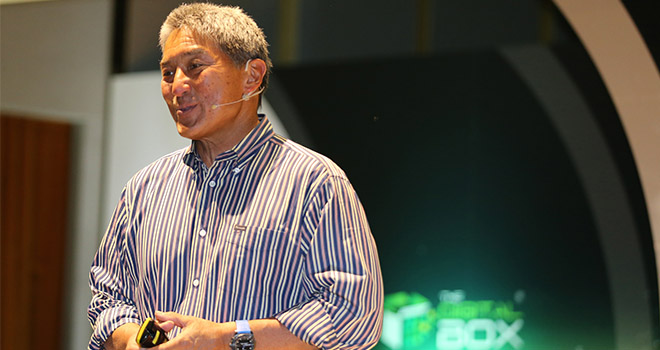 Guy Kawasaki: “Do not be scared of making mistakes”

The man who worked with Steve Jobs on the first Macintosh was in Milan to provide some advice to experienced and budding entrepreneurs. That’s what he said

Milan – How can we combine artificial intelligence with mobile and social media to improve company marketing? The issue was discussed at the Bocconi University, where The Digital Box agency organized the Digital Convergence Day event, in which companies such as Google, Microsoft and Facebook showed their results, some speakers discussed the future of the sector and the Californian Evangelist Guy Kawasaki provided advice on how to be successful and improve online presence.

Guy Kawasaki was one of the first employees of Steve Jobs. He was in Milan for the first time and explained his winning formula based on practical advice for budding and experienced entrepreneurs. He started from what seems the most trivial advice: ask yourself simple questions. Marco Landi then returned to Italy and devoted himself to helping young people who, with their business ideas, want to break into a difficult context, whose creativity and ingenuity are highly emphasized as distinctive traits but where, “if you are looking for some funds in order to develop and you don’t have a good network, it’s very difficult to survive,” he says.

Never ask consumers what they want. If we had done so at Apple during the time of the first Apple Computer, they would have replied they wanted a better Apple II and we would never have worked on the Macintosh””, said Kawasaki.

The Silicon Valley Evangelist then urged the audience to always try to imagine the next curve in the reference sector. “Think of the maps: first they were on paper, then digital ones came and after Waze, where the map is integrated with users’ real-time comments,” he explained. When you are a company, the real problem is not losing sight of your mission: “Kodak and Polaroid believed they were in the chemical industry and not in the business of recording memories. So, ultimately they missed the digital photography train”. Some more advice from Kawasaki: “Do not be scared of making mistakes”.

“In Silicon Valley it is said: first deliver, then test”, explained the speaker. The other great maxim of the technologist is: don’t be afraid to change your mind, because rethinking a strategy is a sign of intelligence and strength. “In July 2007, Steve Jobs said the iPhone would be a completely closed ecosystem, 12 months later we announced a platform for developers. He changed his mind radically, because he understood that he had been wrong”, recalls Kawasaki.

The Californian then addressed the topic of social media, recommending the audience to always take a position: “I am staunchly anti-Trump. There are some people who tell me that this stance may alienate potential new followers to me, but I don’t want to talk to people who voted for Trump. And I will go even further: I have not lost any followers and also strengthened the loyalty of the ones I had. If you are a brand you have to be more cautious, but it is still right you take a position in some cases“.

Read the article
5 years ago